17 American Wedding Traditions: Why We Do Them

Weddings in the United States are a bit different than they are in other parts of the world. They involve traditions that may seem strange to people who come from places where weddings look and feel completely different. But, there is a reason for every tradition we do at our wedding celebrations! In this blog post, we will explore American Wedding Traditions, how they started, and why you should incorporate them into your wedding planning process.

1. The bride and groom don’t see each other before the ceremony

Traditionally in America, the bride and groom don’t see each other on the wedding day until she walks down the aisle. This started in the Victorian era, when women were viewed as property who needed to be hidden away. The groom was not allowed to see his bride-to-be before the wedding in order to ensure she would stay beautiful for her husband! 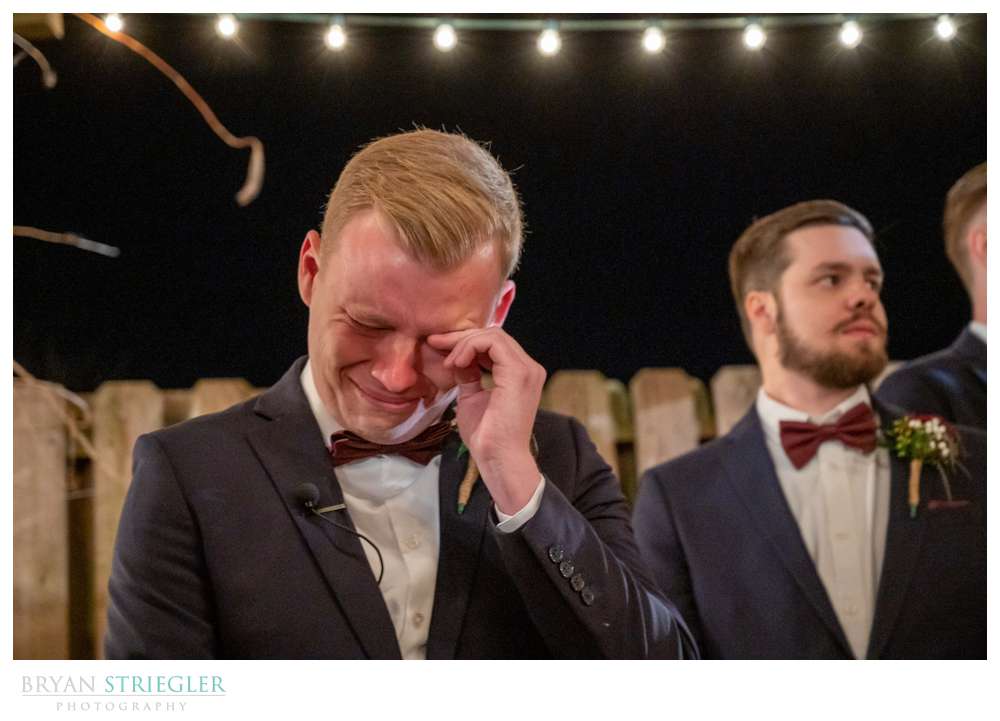 Today, there are many reasons why couples choose this tradition. Some brides want nothing more than to surprise their future husband as he watches her walk down the aisle. Others want to keep some element of mystery for their big day, and choose not to see each other until it’s time!

Lately, things have started to shift with doing a first look between the bride and groom before the ceremony. The emotions are still the same, but it’s more of a private moment.

When you hear that someone is engaged, one of the first things people will want to see is the engagement ring.

A wedding ring is a big part of Christian weddings and symbolizes commitment and something pure and unending. Wedding rings can look very different these days, but the ideas is still the same. You are giving them a ring and wearing it as a reminder of your love and commitment. 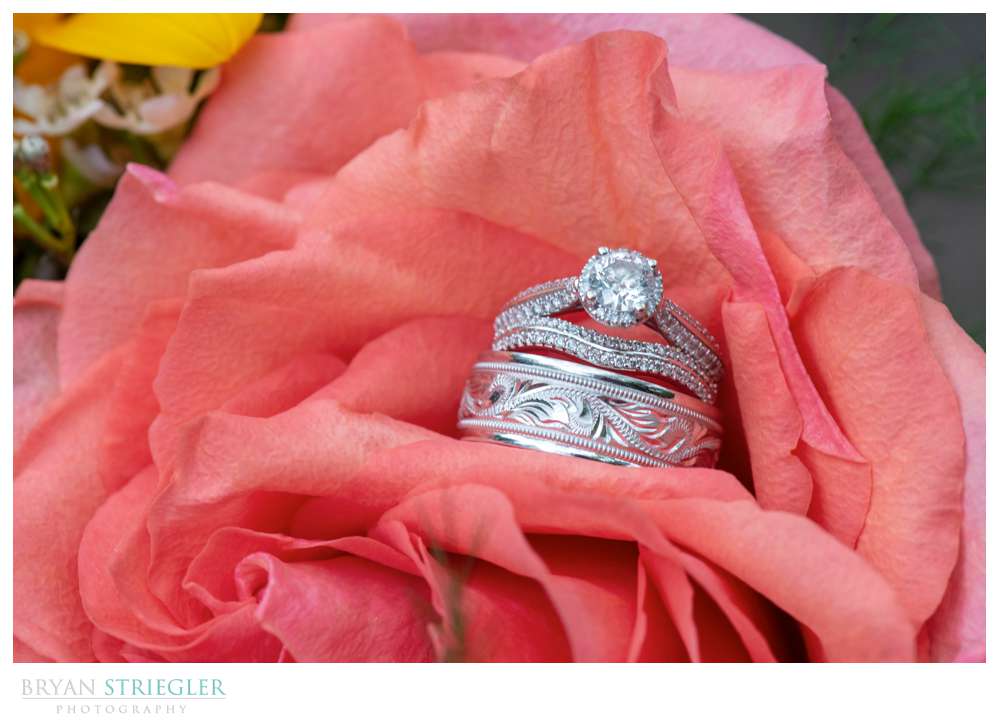 The white bridal dresses are one of the top practices in America today. Honestly, I think I’ve only seen maybe one or two non-white wedding dresses in 12 years of being a wedding photographer. The tradition also originates from across the pond in England. Queen Victoria had a beautiful and very public wedding in the early 1800s where she donned a white lace blouse. 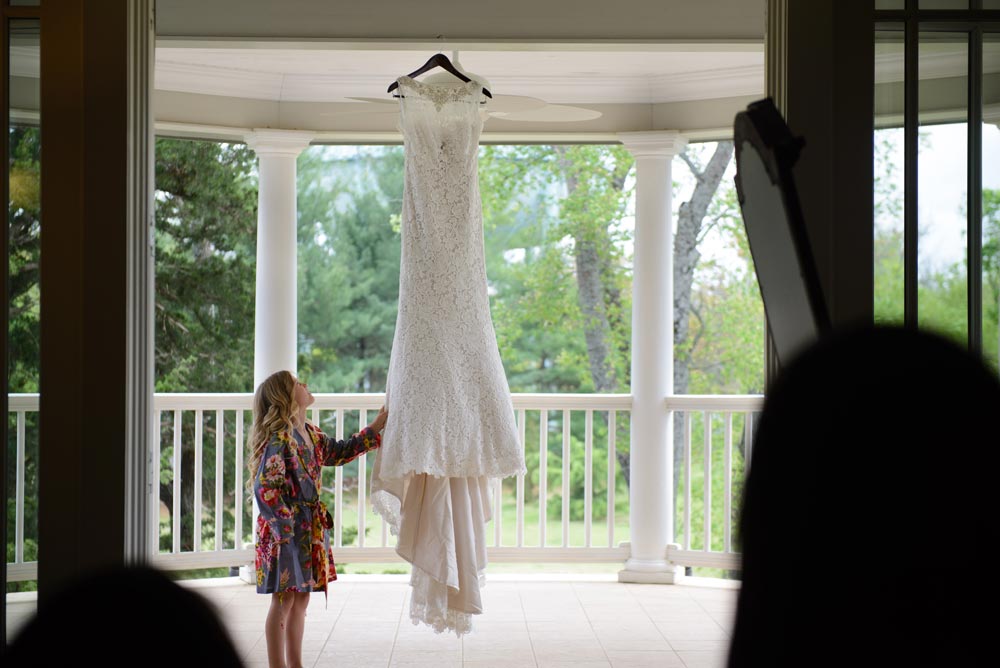 There’s also a good amount of symbolism behind the color white. It represents purity. With this wedding tradition, it’s also important that other guests or people in the bridal party don’t wear white. It’s reserved for the bride.

4. The father walking the bride down the aisle

There are some moments in American weddings that really are emotional and dramatic. The father walking the bride down the aisle is one of them. 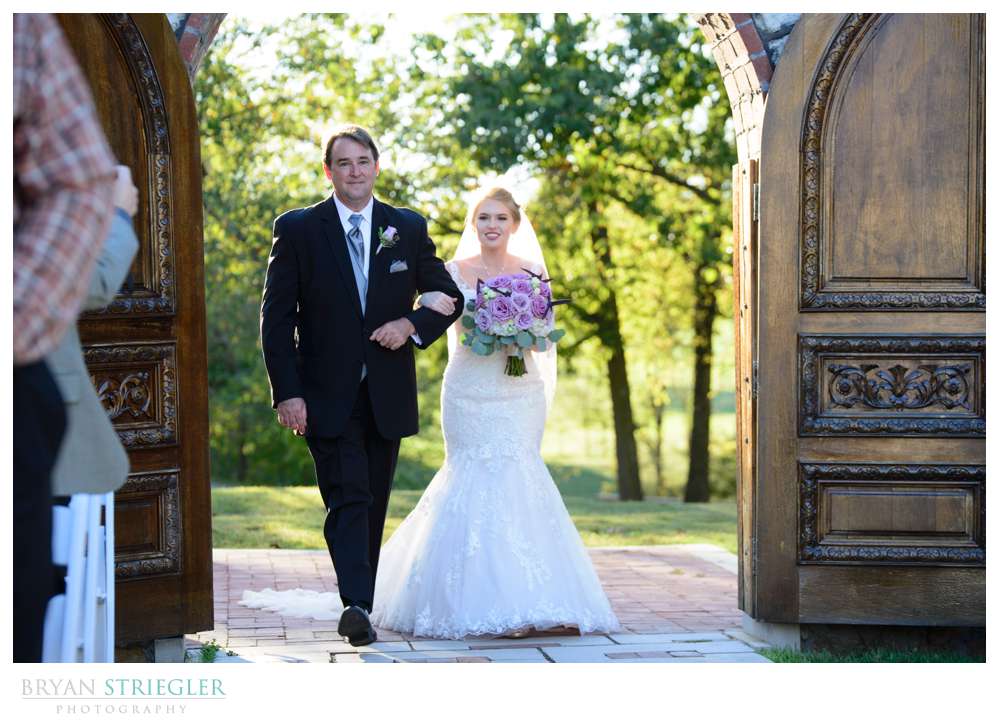 First, this moment is when most people see the bride and her dress for the first time. That can be an emotional moment for the groom and everyone.

Second, it’s a big moment for the father. This is the last time he gets to walk with her, and he knows that every step is bringing her closer to her new husband and family.

5. The bride’s father gives her away by handing her over to the groom

Traditionally, this moment dates from the era of the organized Marriage. The “give-away” of the bride represents transfers of ownership. Young women were used as collateral to resolve debts or conflicts with neighboring tribes. In today’s culture, it’s more of the father letting go of her and letting someone else love her and protect her. 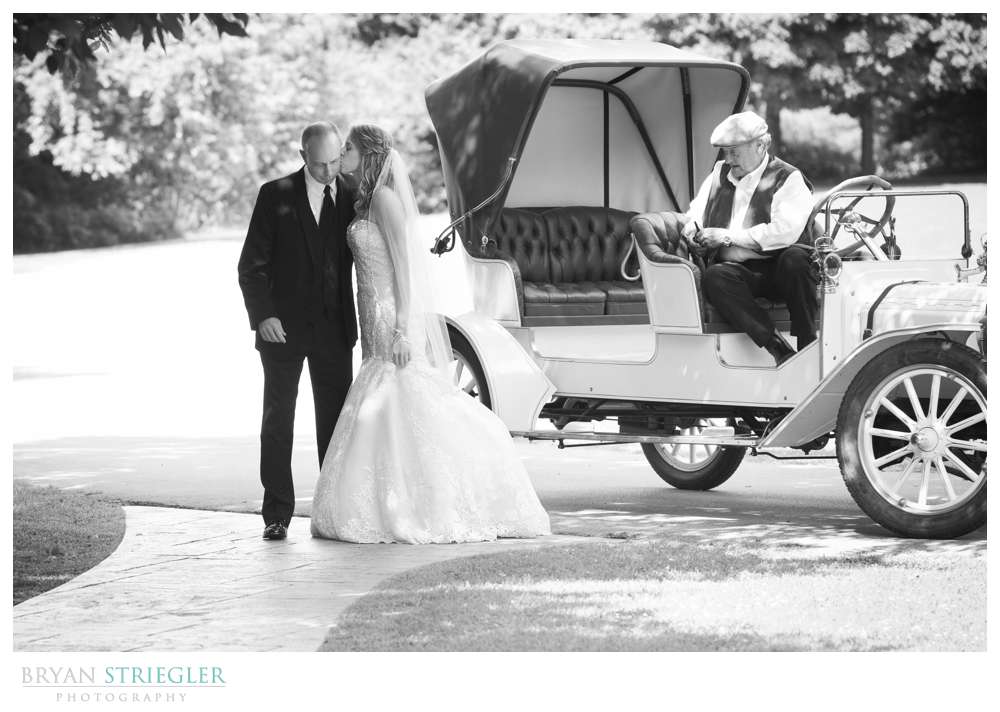 Flowers and bouquets are a large part of the decorations and visuals, just like the dress. It wasn’t always this way. Back in Ancient Rome and Greece it had been in vogue to carry aromatic bouquets of onions, garlic dill and other herbs to repel evil spirits. Carrying a favorite flower variety is a tradition that became popular in 1840, and I’m glad it did because flowers smell much nicer than garlic. 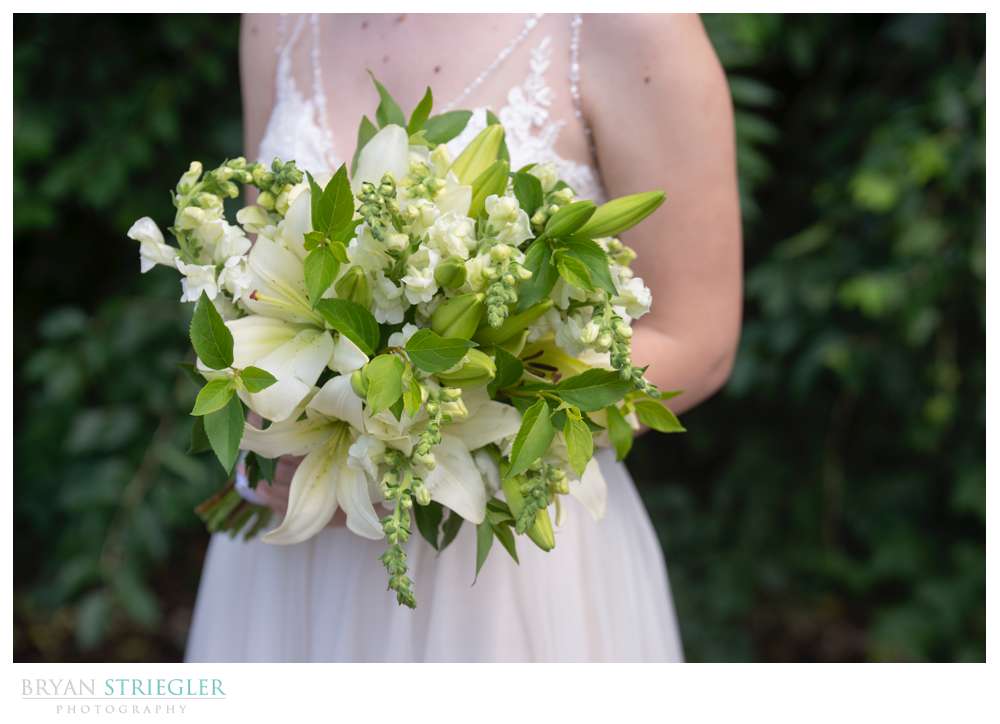 Not every bride wears a veil in modern weddings, but traditionally, it was used to cover a bride’s head. 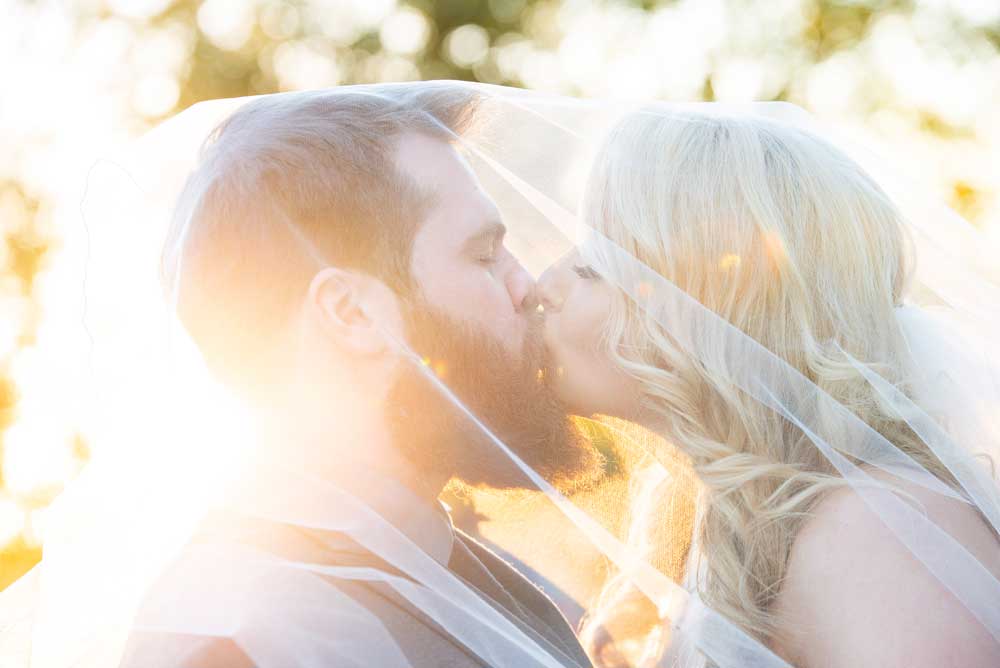 In the past, there were some different reasons for the veil. Some believed that hiding the bride protected her from evil spirits. In other situations, like arranged marriages, the veil covered the bride so that she wouldn’t be recognized and approached by other men.

A wedding ceremony would seem strange to most people if it didn’t end with the bride and groom kissing. It’s one of the first things they do to show they are a married couple. 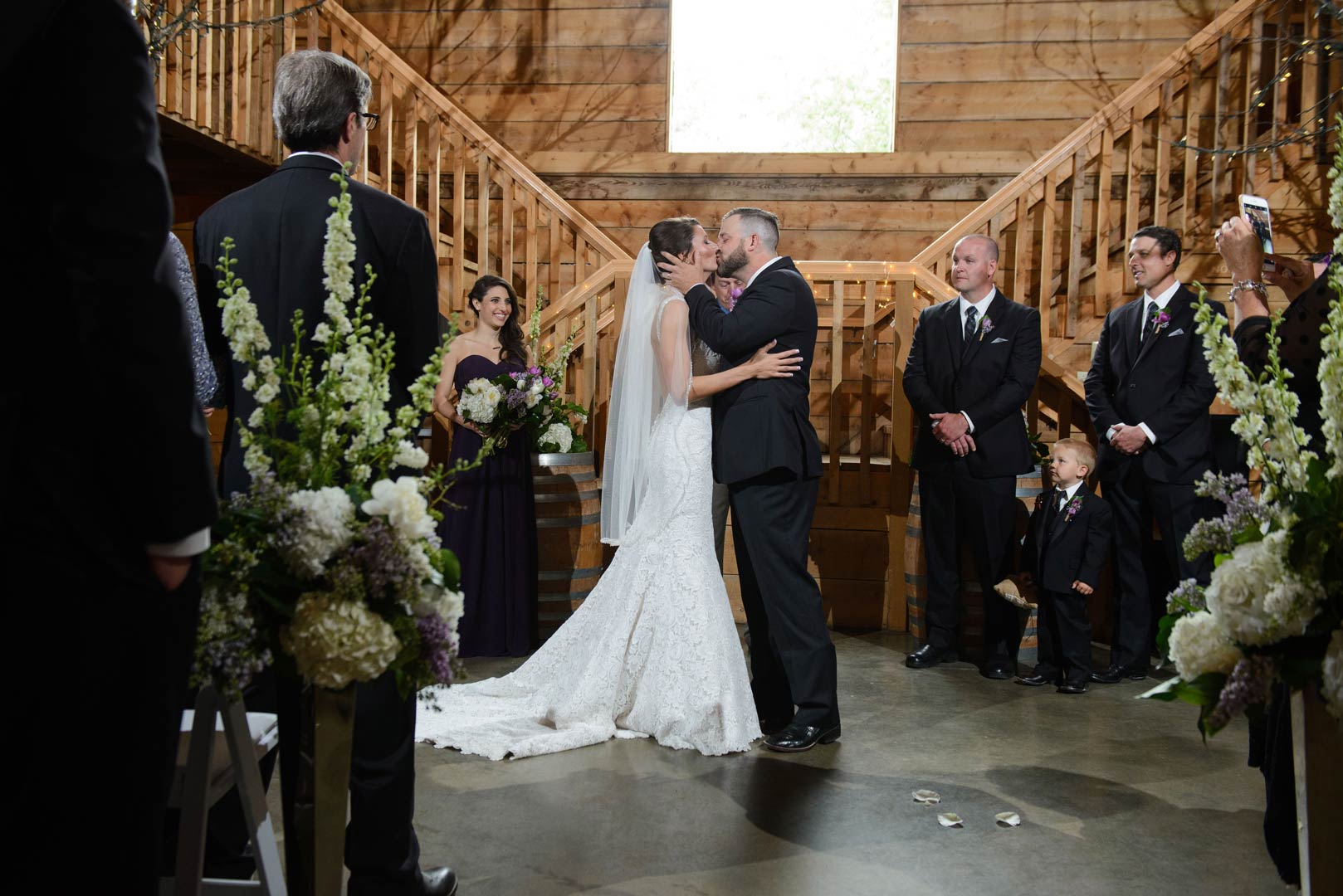 The first kiss started in Ancient Rome when a married couple kissed in front of family and friends to show their love for each other, the community, and the Gods. They believed that this kiss would protect them from evil spirits or bad luck during their marriage.

9. Something old, new, borrowed and blue

When deciding on a bride’s overall outfit, she usually considers these three things and incorporates them in some way. She might wear old earrings, borrow a veil, and have a blue ring. 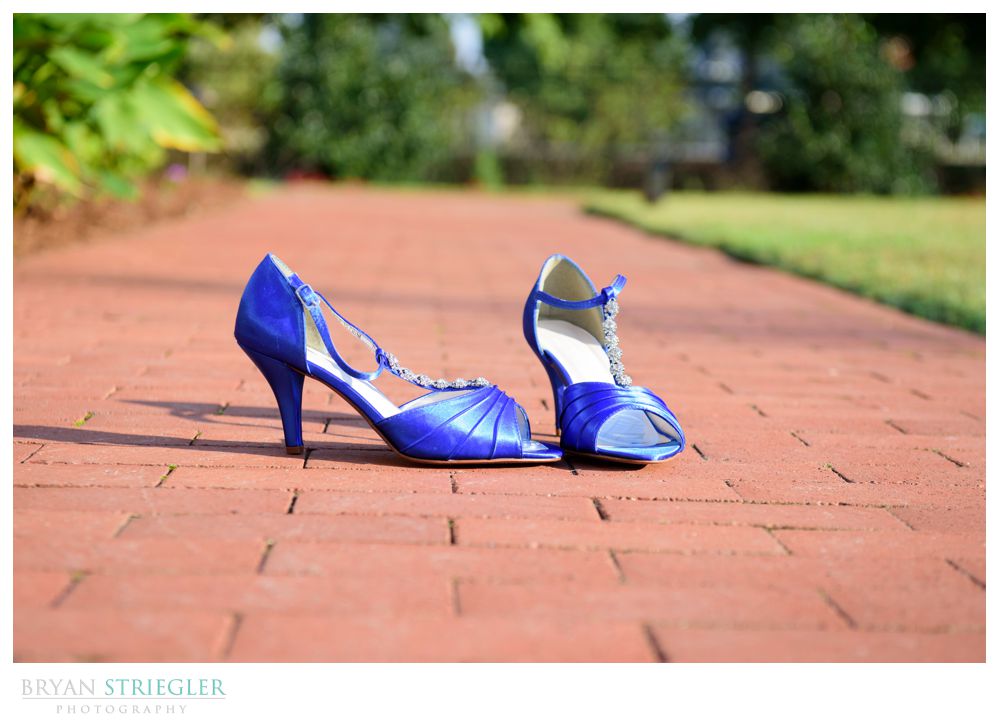 The “something old” was worn to connect the bride to her family and her and the “something new” signifying she was about to start a new family and journey now. Unlike the old, the bride’s borrowed possessions should have been taken from happily separated couples so that their good fortune could be passed through for the bride. Something blue was identified in relation as faithfulness and loyalty similar to true blue.

It’s interesting how wedding customs change over time. Some things people stop doing, but the idea can still be connected to a wedding ceremony. 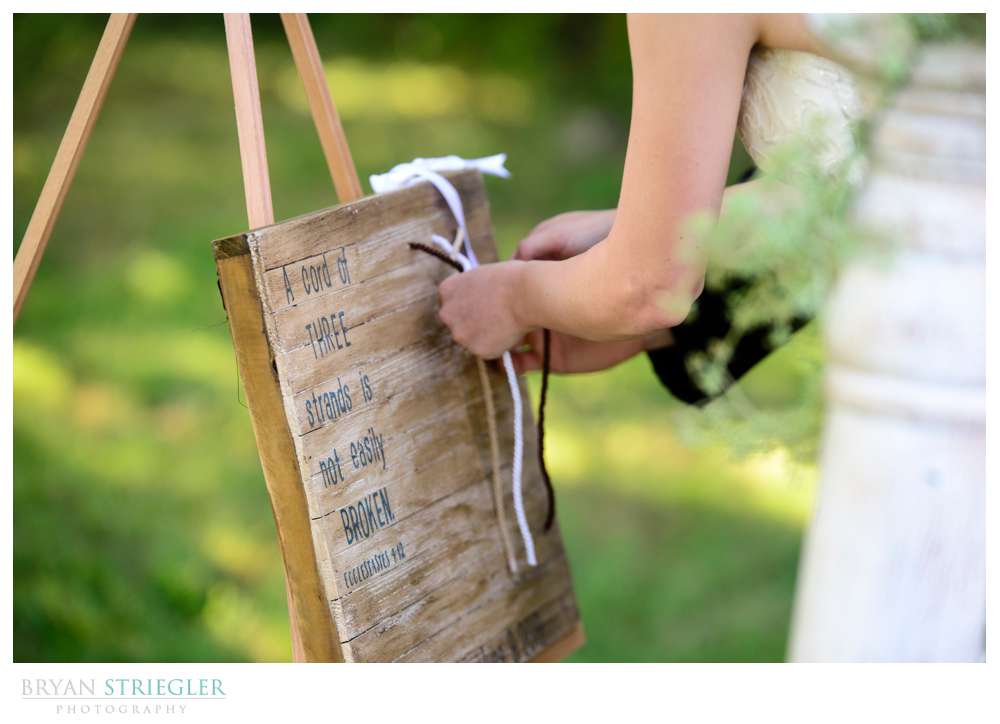 We often hear people refer to marriage as ‘tying to knot.’ This comes from a hand fasting ceremony. Hand fasting is a Celtic ritual which represents an unbreakable promise to bound the couple together. They would actually put the couples hands together and tie them together.

I love wedding cake! Sometimes I think it’s why I became a wedding photographer. These days, most couples still do a wedding cake, but I’ve also seen pies, cookie cakes, and cupcakes. 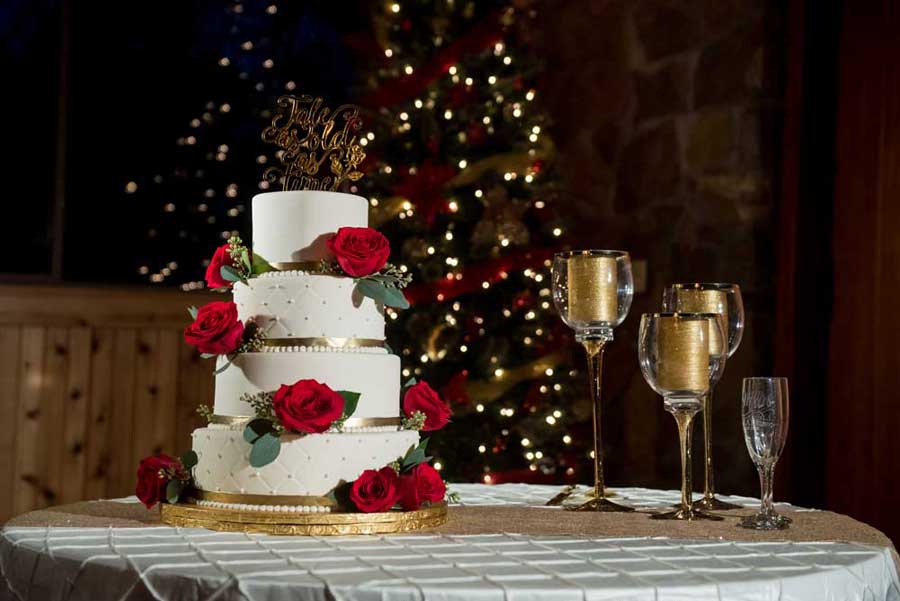 Originally, instead of wedding cakes, they had a wedding pie. I’m not sure if it was a pastry or fruit, but the couple would eat from the same piece of meat to show their love for each other and that they were sharing everything together.

After growing in popularity around 1780-1940’s wedding cakes became so popular because of new technology creating better baking products like sugar and flour. They also had the technology to create more elaborate wedding cakes than what was possible before.

Cake toppers started when Prince Albert and Queen Victoria had chosen to celebrate their wedding with miniature sculpture of herself. Today cake toppers can be a similar, generic bride and groom, or you can buy all types of designs off of Etsy.Saving the top tier of the wedding cake. 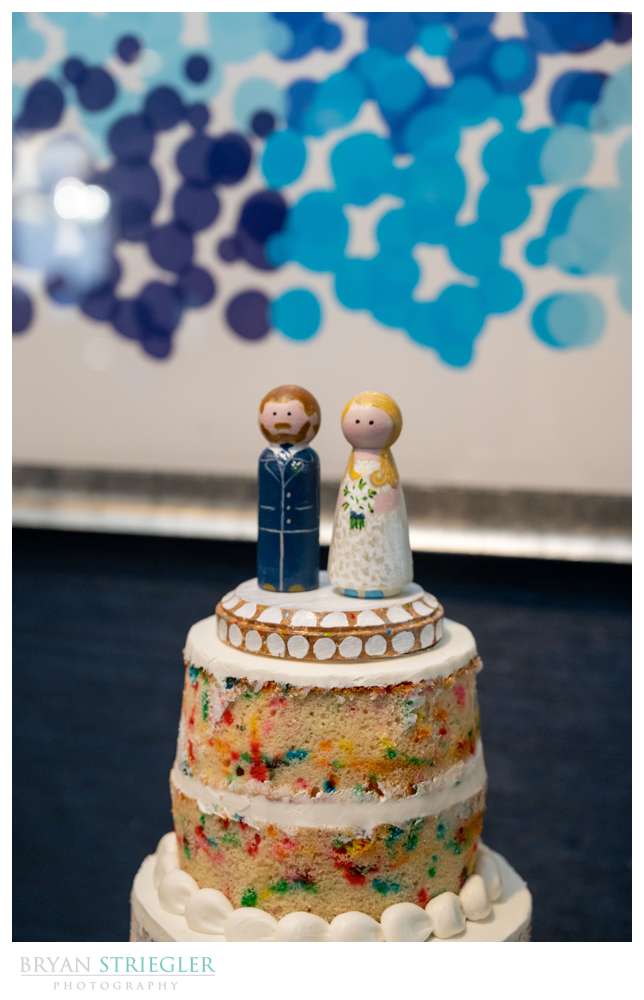 13. Saving the Top Tier of the Wedding Cake

Another tradition in formal weddings is saving the top tier of the wedding cake while the wedding guests eat the rest. The tier of the cake is saved and stored and frozen. Then, the cake can be enjoyed either on the one year anniversary or for their kids’ christening.

Some still choose to follow this tradition, but others will choose to have the bakery remake the cake instead.

One of the first things done during the wedding reception is the first dance. This is when the bride and groom share a dance before all the other dancing starts. 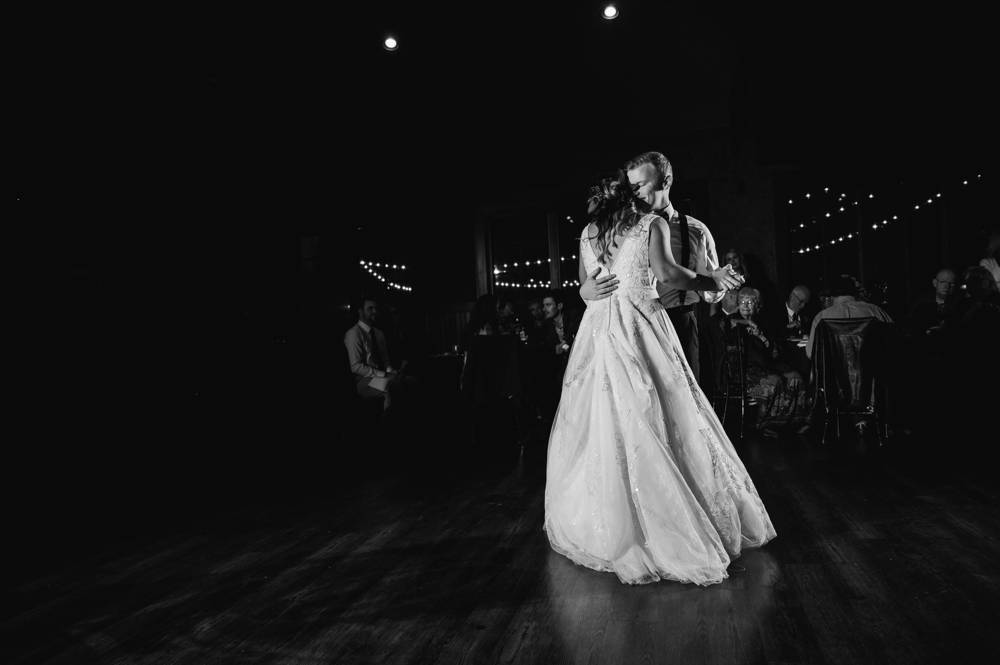 Some do romantic slow dances while others dazzle people with choreographed routine backed up by upbeat music. Often, the couple will pick a song that has special meaning to them.

A garter is a frilly piece of material the bride where’s around her thigh, and often is a symbol of a bride’s virginity. The groom will remove this, often with his head under the dress, and toss it to all the men in attendance during wedding reception. Whoever catches the garter is going to be next married, since they’re considered lucky! 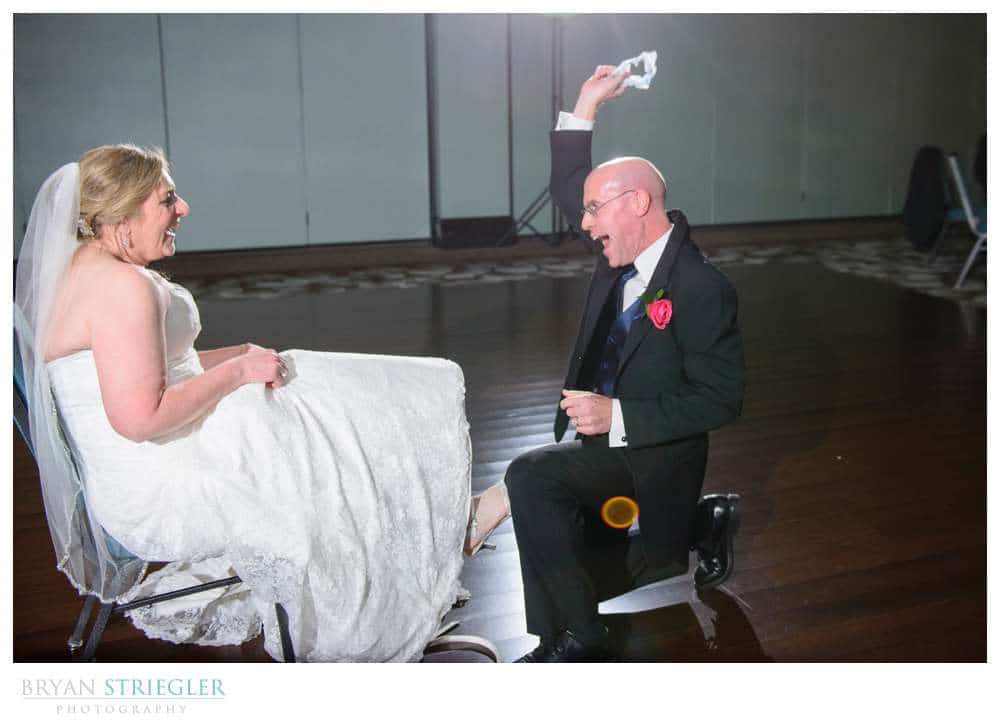 The wedding exit is really exciting. It’s the end of the wedding reception and the bride and groom are racing off. In the American wedding culture, wedding guests would throw rice as they left. Rice was thought to bring fertility and good luck. 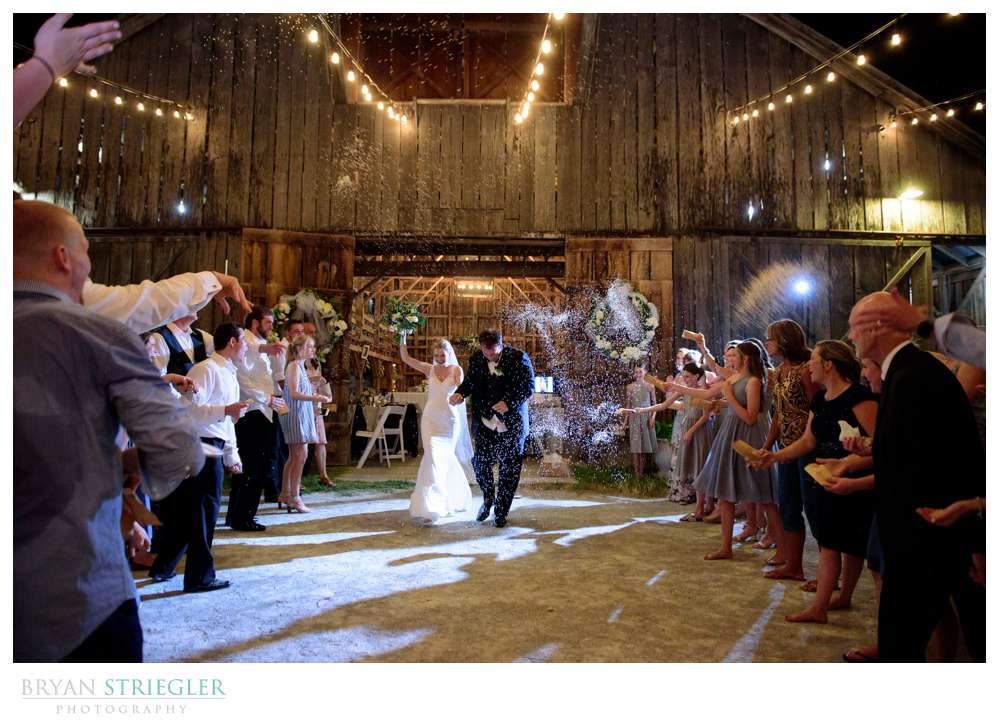 Normally today you’ll see sparklers or bubbles used instead since birds might eat the rice and die.

17. Carrying the bride across the threshold

Now that the wedding is over, there is still one more wedding day tradition. The groom will carry the bride across the threshold of where they are staying. 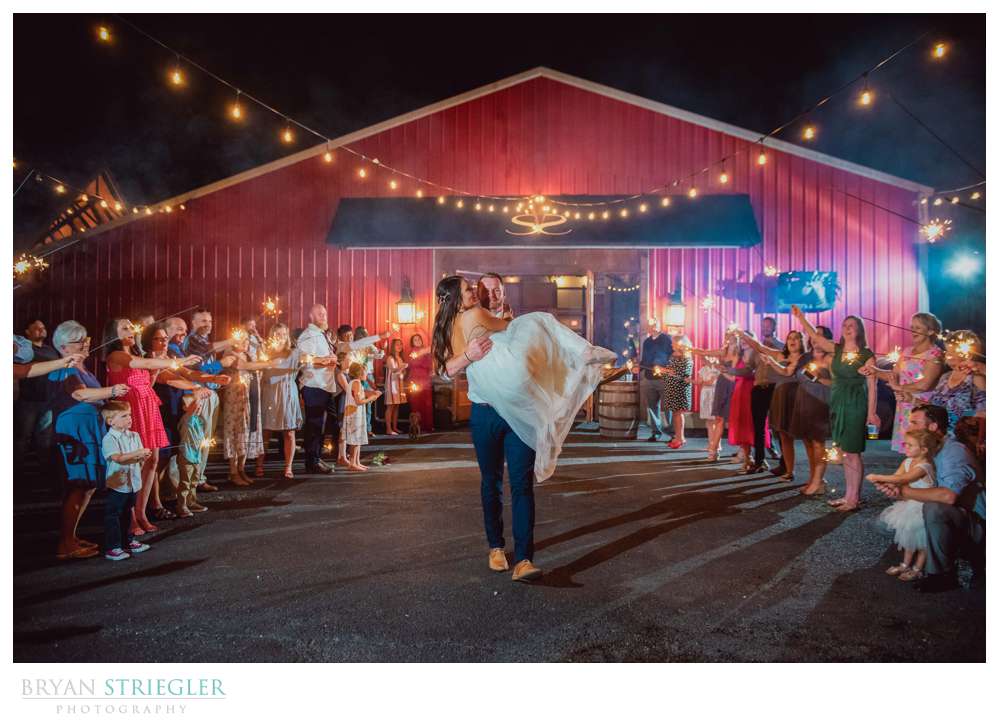 This started in ancient times when women were said to be frail and couldn’t walk across the threshold.

The idea behind this is that it shows how strong her husband must be because of his love for him, just as he carries all their burdens together.

Wedding Traditions in Other Countries

I thought it would be fun to take a look at some other wedding traditions across the globe. You never know, you might see something you want to use at your wedding.

In Lebanon the Zaffe starts off with musical, belly dancing and shouting at both the bride’s and his parents’ homes. Eventually everyone ends up at the wedding house where the couple are paraded with flowers while leaving for an official reception. Zaffe is known for its rowdy atmosphere with belly dancing and professional performers and musicians.

Indonesia: Got to go? Not so fast

Indonesian couples live in Borneo for the next three days. The practice relates to the practice to make sure the newlyweds don’t use the bathroom to reinforce their ties. Talk about testing the patience of newlyweds in the country’s most populous province the province of Borneo. New parents can’t use their bathrooms without paying a deposit.

A lasso made of rosary beads and flowers, is draped around a Mexican couple’s shoulders to form a figure eight by family members. The shape resembles the infinity icon the way they hope to spend their life together. Not only does “el lazo” represent the union of the couple, but its shape also represents the length of the marriage.

Russia: Chew on this

Newly married Russian women share a marriage sweetbread called Karavay in Russian. The sweetbread is decorated with wheat to symbolize a prosperous future and interlocking rings to promote faithfulness. Whoever bites the largest amount of food without touching his hands is considered leader of household.

India: What a steal

In a ritual called Joote Chupai the sisters and cousins of an Indian bride steal the bride’s shoes and demand ransom for their secure return. What an interesting way to make some money!

Should you do the American Wedding Traditions?

I really believe that wedding ceremonies and the wedding day should be all about the couple. It should be a celebration of who they are and where they are going. If they want to do a wedding tradition, that’s fine. If they don’t, that’s perfectly good as well. Often, they will pick and choose what they like. They might cut the wedding cake but skip the bouquet toss. They might not want to write their own wedding vows but like the idea of lighting unity candles.

With all of that said, make your wedding fit who you are. Talk to each other and find the wedding traditions you like and don’t worry about the rest.