Life is about trying new things.  It gets boring doing the same thing over and over again. That’s one of the great things about photography, every day, every session is different. I recently decided I wanted to try something new, a new subject matter and technique. I had been seeing all these crazy dance photos where the dancer is photoshopped into an amazing environment so I thought I’d try creating a  composite dance photo.

The first step in the whole process was figuring out what I wanted the final picture to look like. It’s always best to have the end in mind so you know where you’re headed. There were two real things I knew I wanted. I wanted a wider shot with kind of a grunge background and I wanted the dancer to have a crazy long fabric flowing from her hands.

There are a lot of digital backgrounds available. The big thing is making sure you are allowed to use the image and not doing it illegally. There are a few sites that are free or only require credit for the image. I spent some time and gathered a bunch of images from Pixabay, Pexels, and Deviant Art.

You really should have your background picked before you start shooting. There are things that will make your photo match the background and if you don’t get it right it will look fake. Things like the angle, depth of field, and lighting really matter. This was my first time doing this so I just gathered a bunch of backgrounds and hoped for the best.

The next step was shooting the dancer. I used a four light setup on a white background so it would be easy to remove her later. The lighting on her was an octabox camera right and a gridded soft box for a rim light behind her camera left. I knew I was going to put a digital fabric in her hand later, so I had her hold a towel and she did moves. I’m not an expert dancer so I let Sophie do her thing and just gave some suggestions along the way. We shot for maybe 30 minutes and had a good variety of shots.

The next step was actually putting the whole composite photo together. First, I had to pick out which dance photo to use. There were a few options, but I picked one where the fabric was away from her, so it would be easier to change. Next, I messed with the white balance to try to match the background photo. Then I cut the dancer out from her photo and pasted her onto the background image. After that, I resized her to try and find a good, realistic spot for her. From there, I messed with the color and a few other things like adding shadows to make it more realistic. 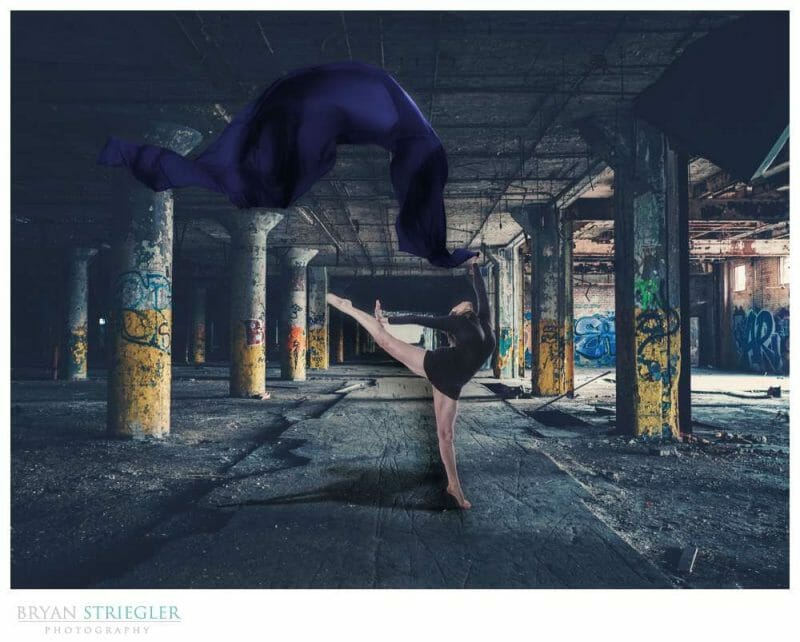 This was my first try at creating a composite dance photo. Overall I feel it looks a little fake, but people still seemed to like it. It’s quite different than what most post, so maybe that’s what really matters. I’ll be messing around with a few more pics and backgrounds for this shoot, but I plan on trying this technique with more shoots in the future.