I don’t remember how Nicholas found me, but we started going back in forth in emails and eventually had a phone conversation. I found out some pretty cool things. He use to be a photographer himself and work for the Arkansas Traveler. It’s always fun to have other photographers to talk to. It’s also a big privilege to be chosen by other photographers for such a big day. 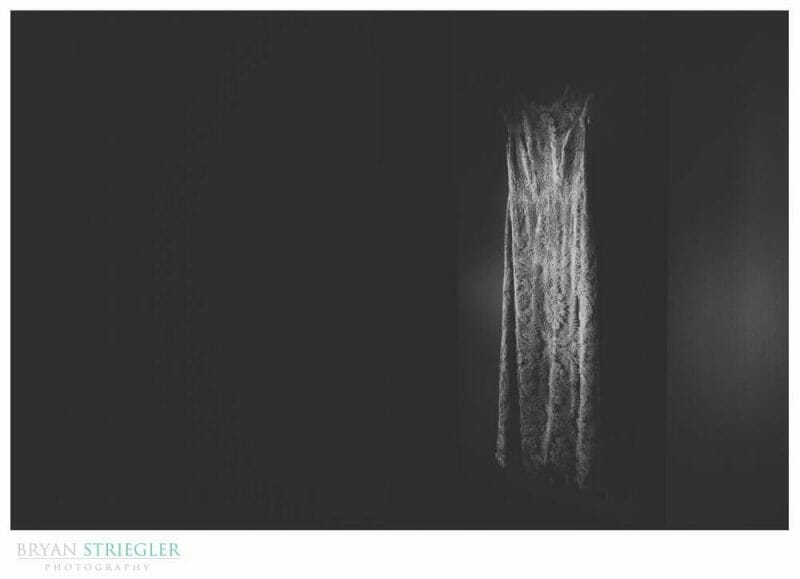 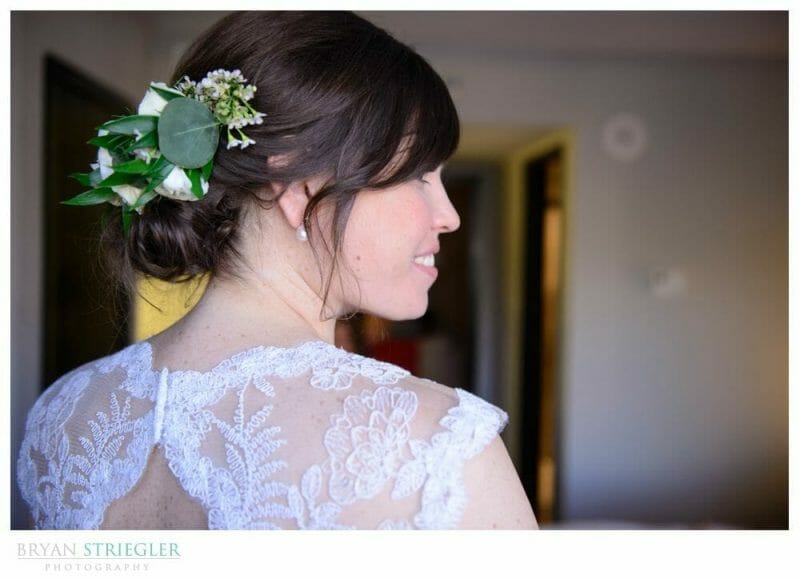 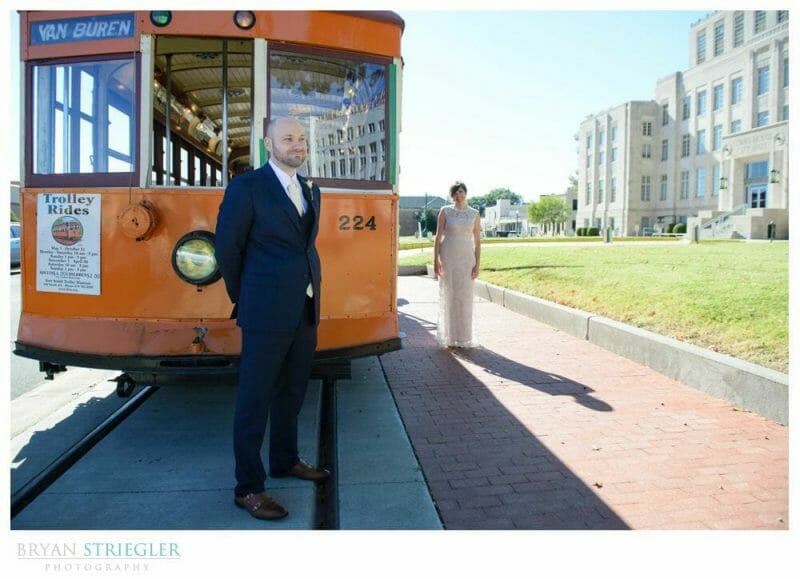 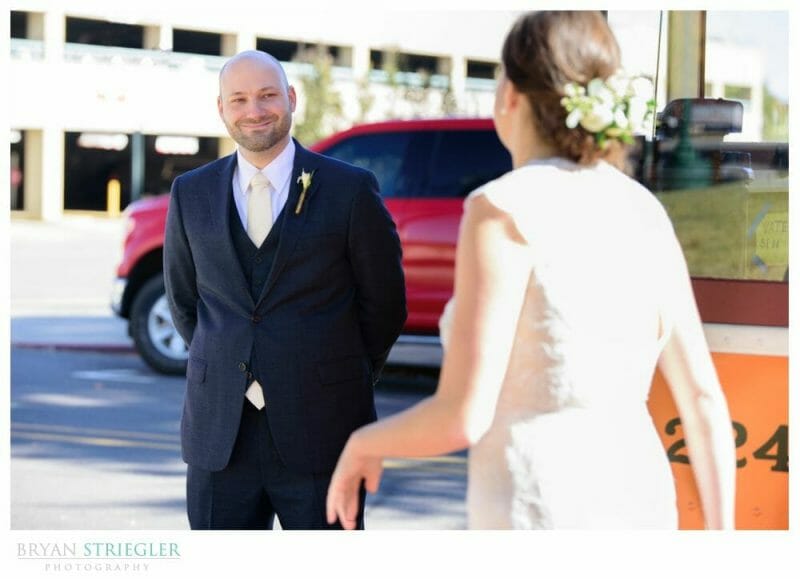 Fort Smith is new to me, so everything was exciting! We started off at their hotel, where we did some quick getting ready photos. Then, we started trying to figure out where to do the first look. While Nicholas was outside, he happened to see one of the trollies that goes through Fort Smith. He managed to get the guy to hang around so we could do some photos. 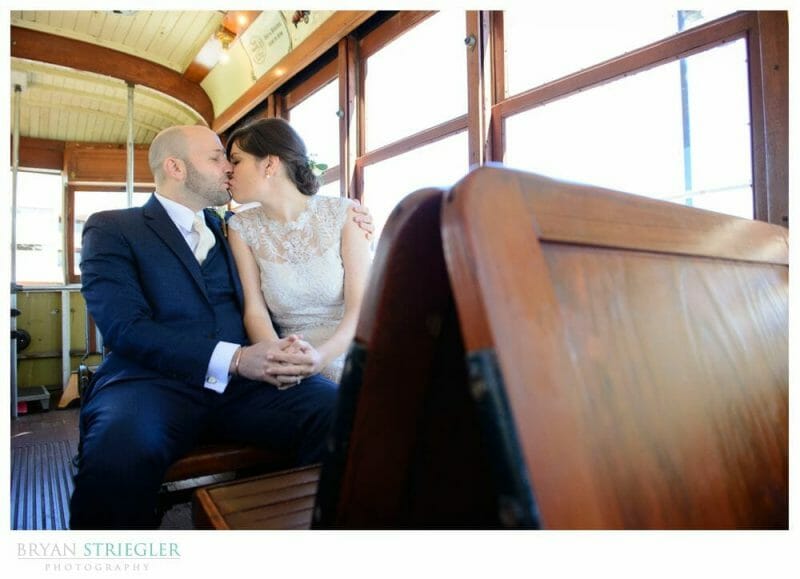 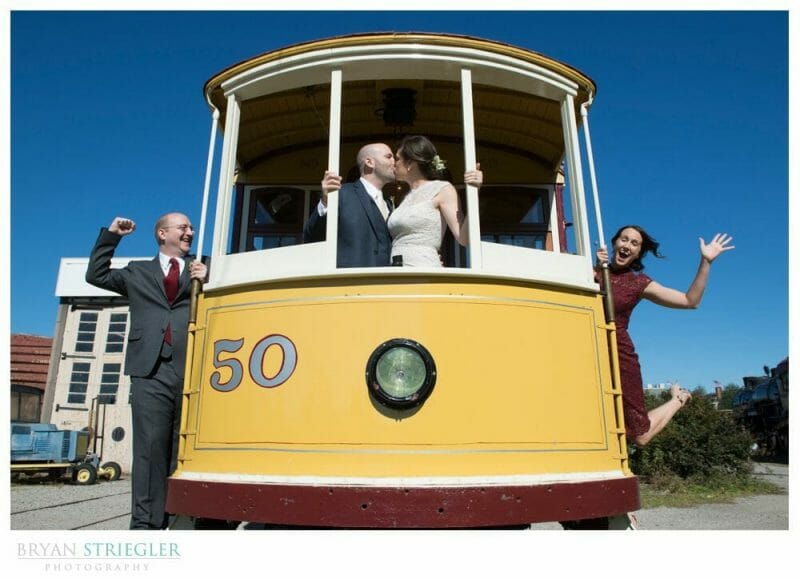 For the first look, we had Nicholas standing on one side of the trolley, and then Carolyn came walking around the corner. From there, we went on a little ride, which was an adventure in itself. We did a few quick portraits with another nicer trolley and then we came back. 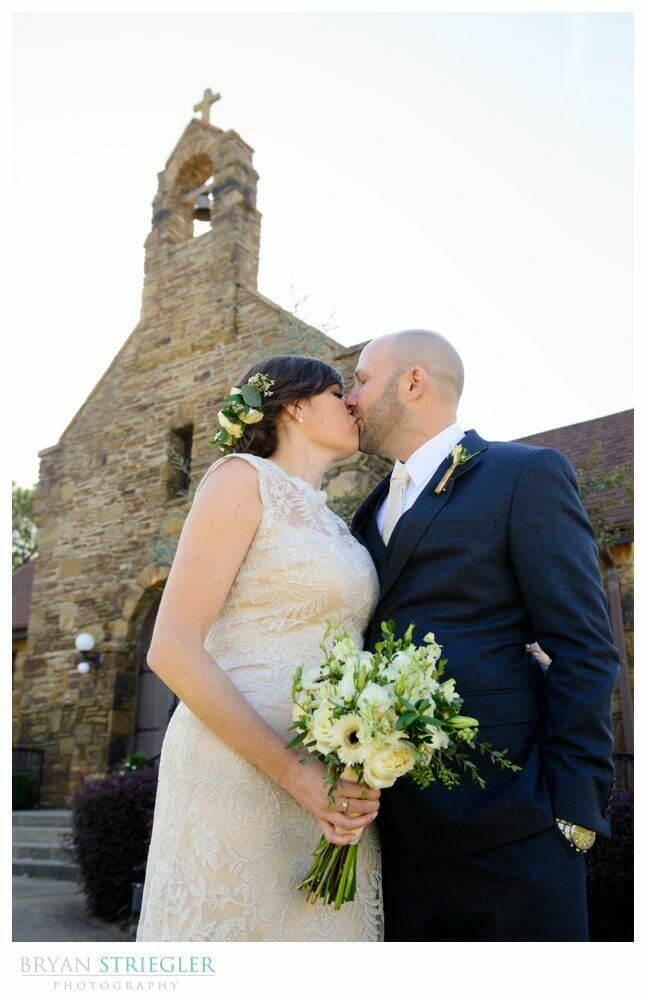 The ceremony was in the same church that Nicholas grew up in, so that was really special for him. It was a nice little church, and it was one of the more entertaining Catholic ceremonies I’ve seen. 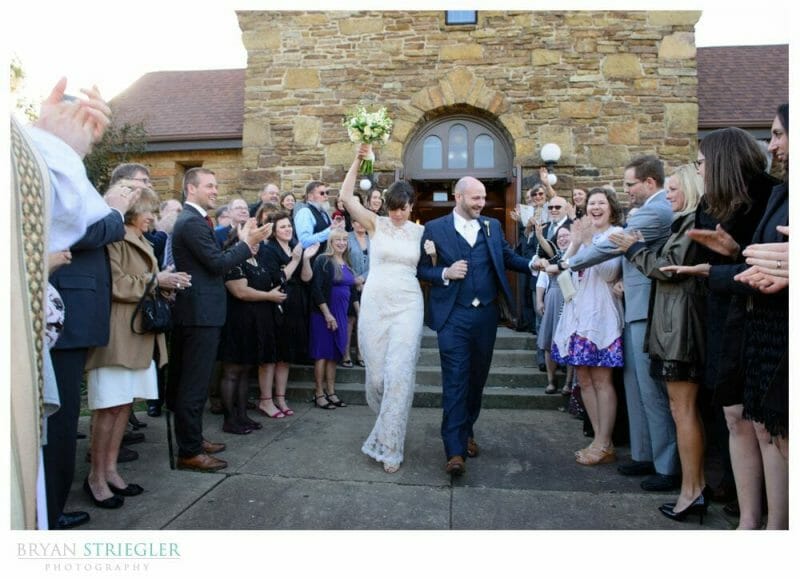 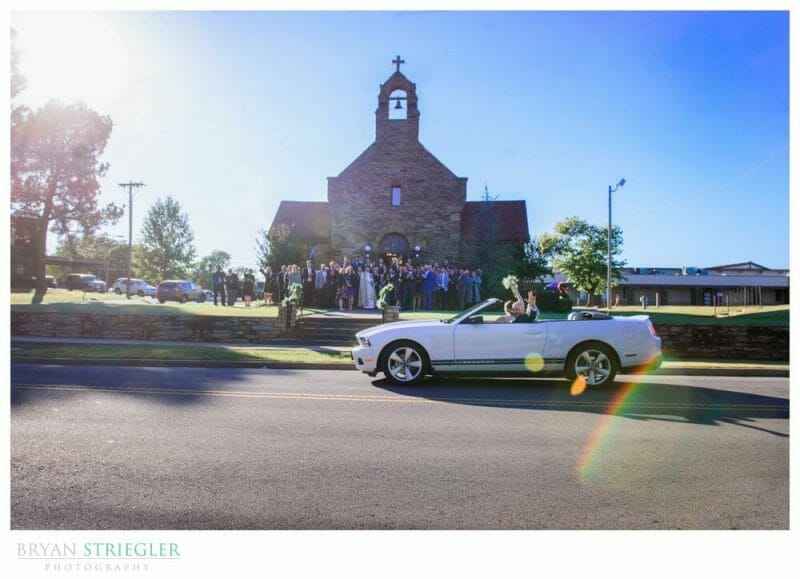 Right after the ceremony, all the guests lined the outside of the church, and the married couple did a quick exit through the crowd and down into their vehicle to make an escape.

We then met back up at the hotel, and a group of us made the walk to the reception site. It was an interesting experience. I kept running ahead and behind trying to find cool backgrounds for the group. At one point, we crossed a major street, and I had them stop in the middle of the street. There was a nice pocket of light that really highlighted them. 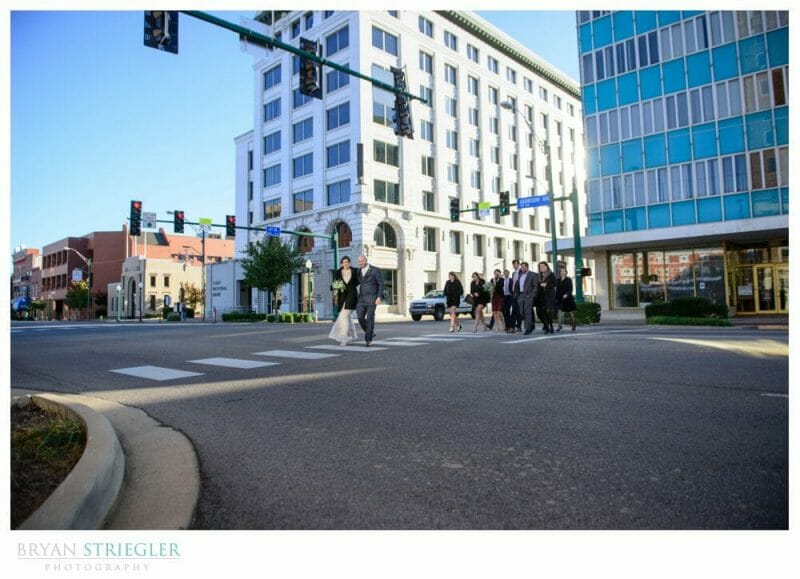 The reception was at the 21 West End. I’m not sure if this is normally a reception site or if it’s more of a restaurant. When you first walk in, there’s a large open space, but then the rest of the building was seating. 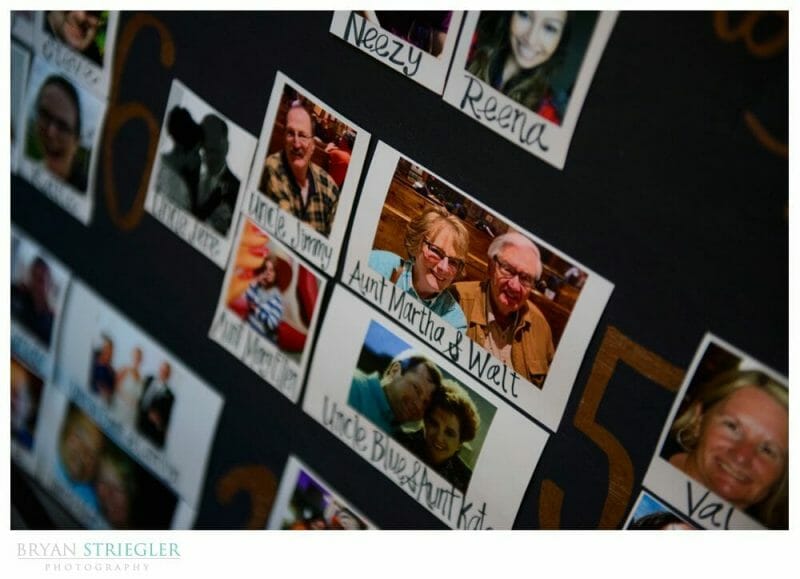 There were quite a few special things about this wedding. One, they made a seating chart using photos of all the guests. It was really fun looking at all the different pictures. Two, the couple wrote personal notes to every single guest! How special is that! Three, they Face Timed with Grandma and had everyone say hi. Four, we created some really unique photos. The doors to the 21 West End were this frosted glass with a 2 and a 1. We messed around and made some silhouettes in there. Then, for the grand finale, we took photos with a ferris wheel!!! Unfortunately, the place was closed, but we still were able to light it up and have it in the background. 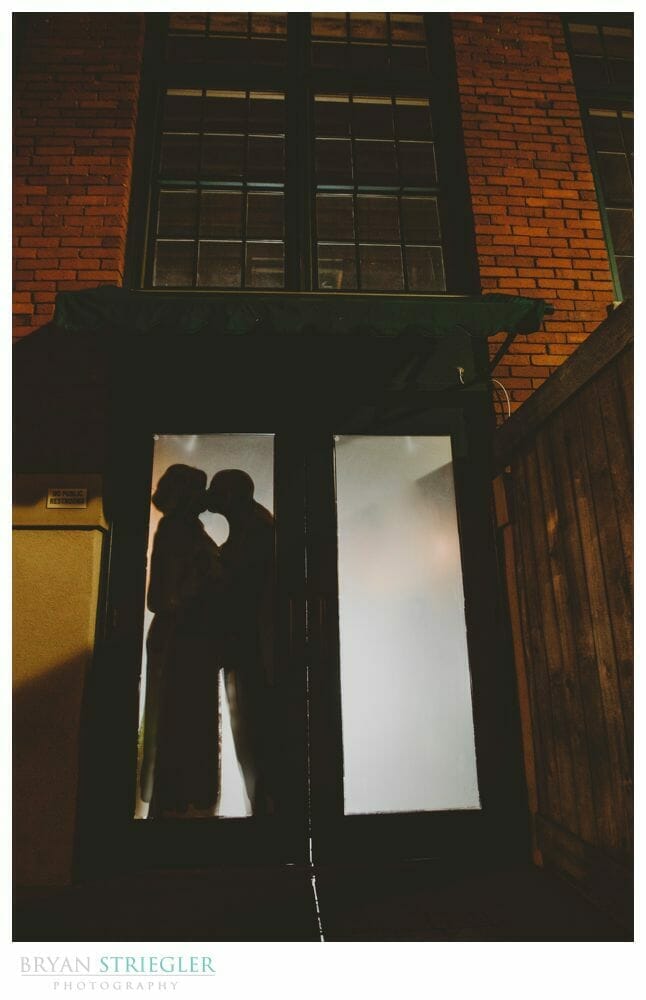 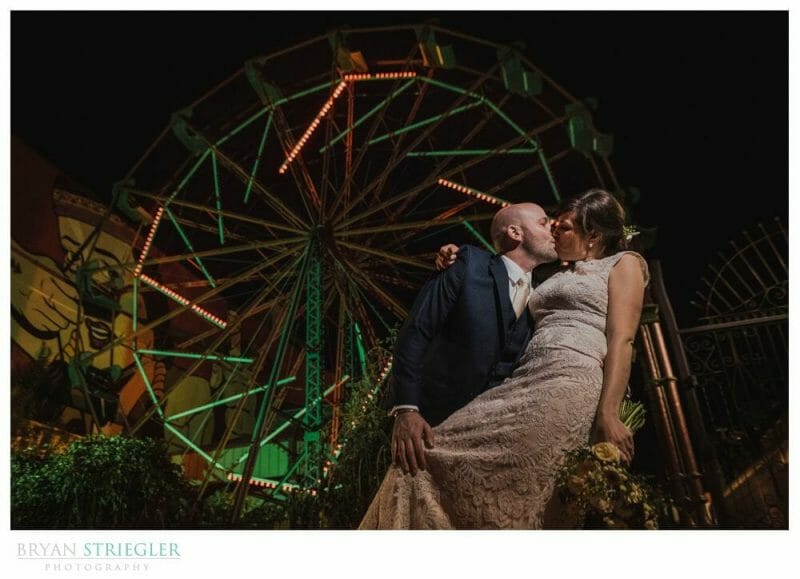 I believe this is the third time I’ve had the privilege of creating Fort Smith wedding photos, but I’m hoping to do more in the future. If things go really well, I hope to travel around the country more next year! From what I saw in this wedding, it’s super exciting to photograph weddings in new places.