How I got the shot- Monika’s Dramatic Wedding Ceremony Photo

Weddings are really all about the ceremony, but these are normally the plainest photos of the day. You could look at several photos from a wedding ceremony and most of them are going to look the same. There’s not a lot of chance for creativity for most wedding photographers because that’s too risky. You can’t go off trying weird angles and other things because you might miss one of the important shots. I really only move to each side and stand in the middle. That’s it. I did manage to get one really cool shot during Monika’s dramatic wedding ceremony photo, and today, I’m going to share how I got the shot.

How I got the shot- Monika’s Dramatic Wedding Ceremony Photo

As I mentioned before, I don’t like taking risks during a wedding ceremony. There are too many important things happening, and the timing of each wedding ceremony is different. Well, Monika seemed like the person that would be ok with me taking a risk. She contacted me 3 weeks before the wedding to shoot her wedding. Yep, 3 weeks. I also told her that I would be in Rwanda until 2 days before the wedding. She was ok with that too!

Her ceremony was set up different than most. They had the chairs all in a circle and they would stand in the middle of it. This was interesting but it did make knowing where to be a little hard. The light in the room was also pretty bad, so I set up two lights hoping to light them up. Well, turns out they were facing the other direction, so my lights could no longer really light the front of them.

About 10 minutes into the ceremony, I decided to try something different. I dropped my exposure to get rid of all of the natural light in the room. Then I stood facing the couple with my lights behind them. I turned up the light and fired away. Now, the only thing lighting them was my lights and because the lights were behind them, I got this moody, almost silhouette look. 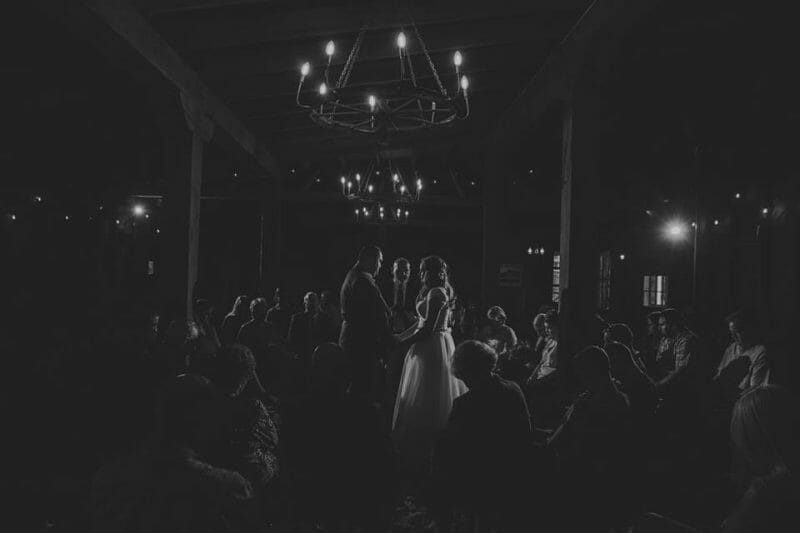 During this, I still did have another camera on me with normal settings so I wouldn’t miss anything. Luckily, I got the shot and then was able to switch my settings back anyway.

Normally I don’t take risks during the wedding ceremony, but this experience has shown me that I’ve been missing out. I’m hoping in the future to be able to take more risks and create some awesome ceremony shots. This might mean I have to get a second shooter for every wedding, but it would be well worth it.