Looking at an Image Before and After Photoshop

A few days ago at an engagement shoot, I started talking to the groom about Photoshop. We joked around about some things, and it did remind me how much Photoshopping something has become a part of the culture. I don’t know how many times I’ve been shooting something and someone would say, “Oh, he can fix that later in Photoshop.” This is true, I do fix a lot of things in Photoshop, but it makes the whole process seem very simple. Sometimes it’s a quick fix, and other times I spend up to an hour on one photo. Today I’m doing something I don’t normally do, looking at an image before and after Photoshop and talking through all the things I had to do to get the image to its final version.

Looking at an Image Before and After Photoshop

This image was taken at the Barn at Hat Creek Ranch, and I knew before hand what I was going to do. The place has these cool Christmas lights coming down from the barn toward this old truck. It was perfect for a nighttime environmental portrait. We waited until it got dark and went to work. There wasn’t much light coming toward them, so I brought in a flash in a soft box. I had to keep it in the shot to light them and not everything around them, so I knew I would have some editing work to do later.

As you can see in the before photo, there are a lot of distractions that take away from the couple and the beautiful setting. You’ve got the light stand and soft box, the woman looking back at the camera, a few people close to the couple, and the videographers camera shining in the background. Honestly, I probably should have removed a few other people, but I chose not to for some reason. Some of these things I could have fixed, like possibly moving the light stand, but the rest would be tough. I wouldn’t feel right telling all those people to move out of the way for the photo. I guess we could have waited a few minutes to see if people would clear out, but we were in a rush. Anyway, this just left me with a lot to get rid of.

This whole process sounds rather simple when I say it that way, but it’s really not. I used what’s called the clone stamp for a lot of it. It basically allows you to paint and copy one area over another. For example, the people on the far left were just painted away by using the sky and the darker background. Other parts were much more involved. I lost the whole left edge of the barn and part of the right. I had to take parts of the rest of the barn and use it to create a realistic looking side. 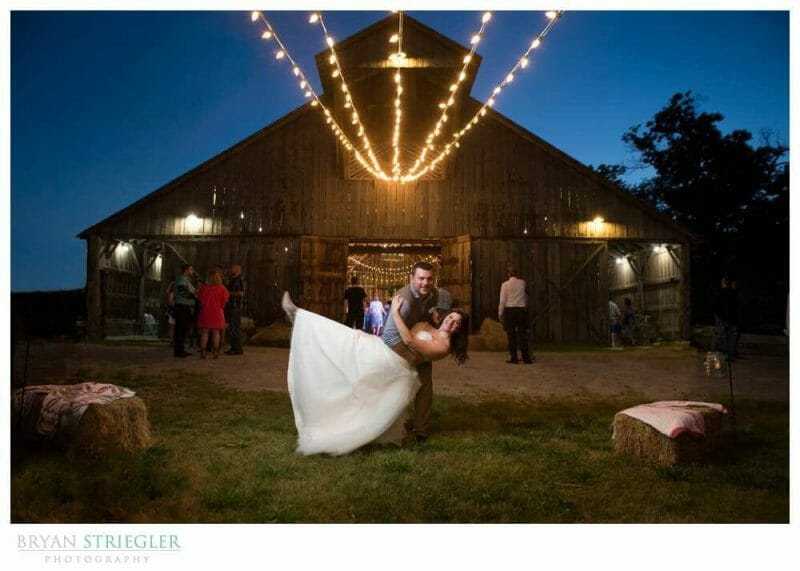 Now that I’ve pointed out some of the things I’ve done, you might be able to notice some slight oddities in the final photo, but I guarantee that if you didn’t know what I had done, you wouldn’t have noticed it. When looking at an image before and after Photoshop, it might seem like I’m warping reality, but all I really care about is creating works of art for my clients, even if it takes me an hour.