Engagement sessions are a chance for a couple to show off their personalities to the world. The best engagement sessions will have something personal and unique added to it. For Alyssa we used a motorcycle, dogs, and an old cabin to create unique engagement photos.

Alyssa was a student at Mayflower back when I was teaching. I had her brother for football and I was around her a lot for football games because she was a cheerleader. Unfortunately I never had her in class because I’m sure she would have been fun to be around.

When she got engaged, she contacted me about shooting her wedding. A few weeks later they decided to have a destination wedding on a cruise. I was bummed, but we decided to still do engagement photos.

Her fiance, Brandon, had a relative with a house out in West Fork, so we used that location for the shoot. It was right off the highway and on top of a hill, so we had this amazing view into the valley with the forests and roads. Before Alyssa arrived, we were looking around and saw a motorcycle near the house. It looked perfect for the shoot, and amazingly enough, Brandon and Alyssa actually use it and were wanting to use it in the shoot as well. We placed it out the yard with that amazing view in the back. The sun was starting to come up, so we used the big Rapidbox Octabox with the Flex TT5 to light them from the front. This allowed us to really darken in the skies and create a dramatic photo.

Alyssa loves dogs. She works at a dog daycare and all I ever see on Facebook are photos of her dogs. So of course we had to get some photos with their two dogs. The first one was pretty easy. I had them sit on the front porch and put the dogs beside them. I was still new to the dogs, so they paid attention when I made noises. This only works so long. For the  second shot, we went behind the house. We tried a shots with them walking the dogs. This was a bit trickier because they wanted to go different directions and were looking all around. For the last one, we just had them squat down with the dogs.

We found several spots around the house to use. On the front porch, we had Alyssa and Brandon leaning onto the railing. Then, we had them sitting on a brick wall behind the house. I’ve found that giving people something to sit or lean on makes people more relaxed. When people stand, they seem more rigid most of the time. The last location was really interesting. In the woods was this old cabin. It was run down but looked great as a backdrop. It was surrounded by trees and a fallen limb, which added to the atmosphere. 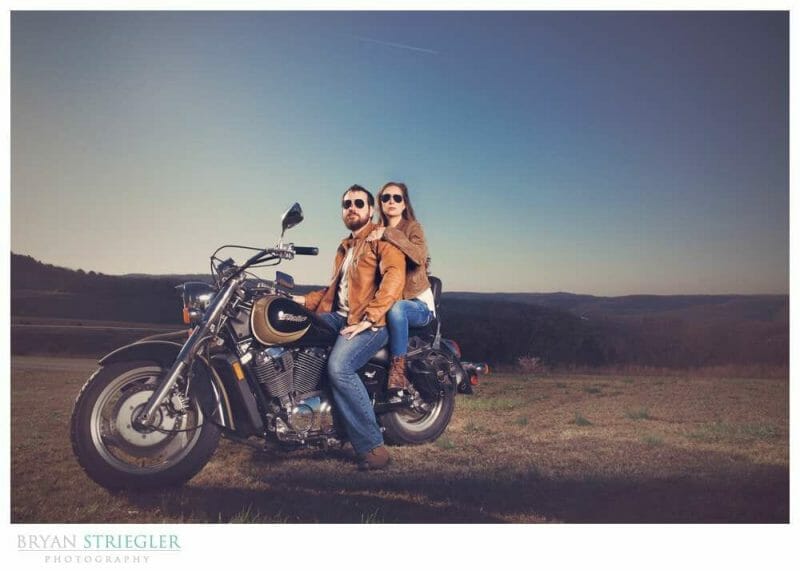 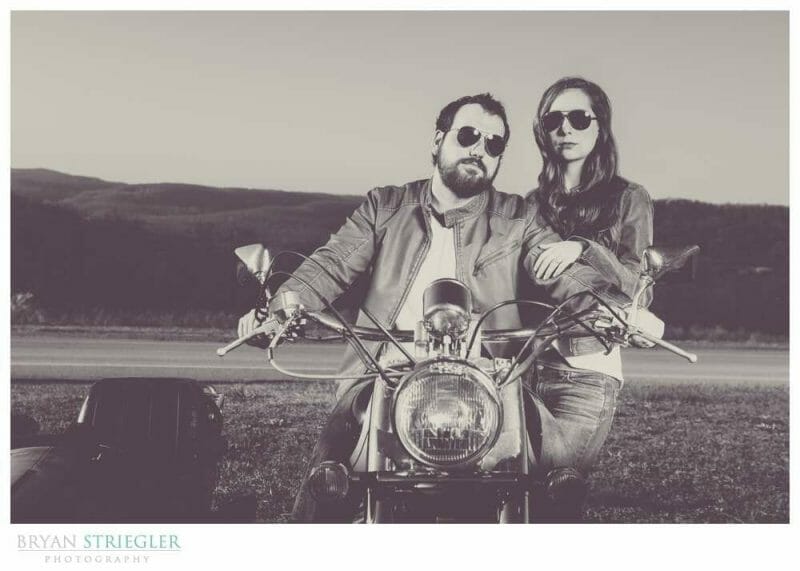 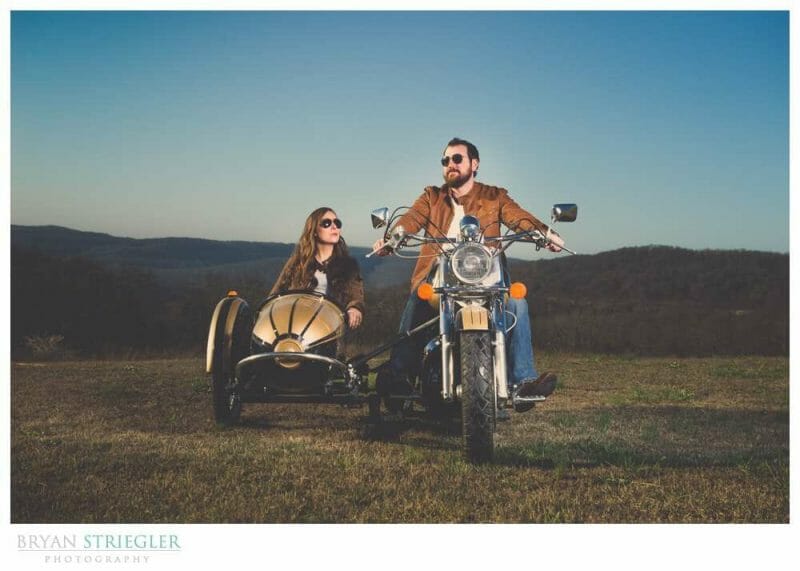 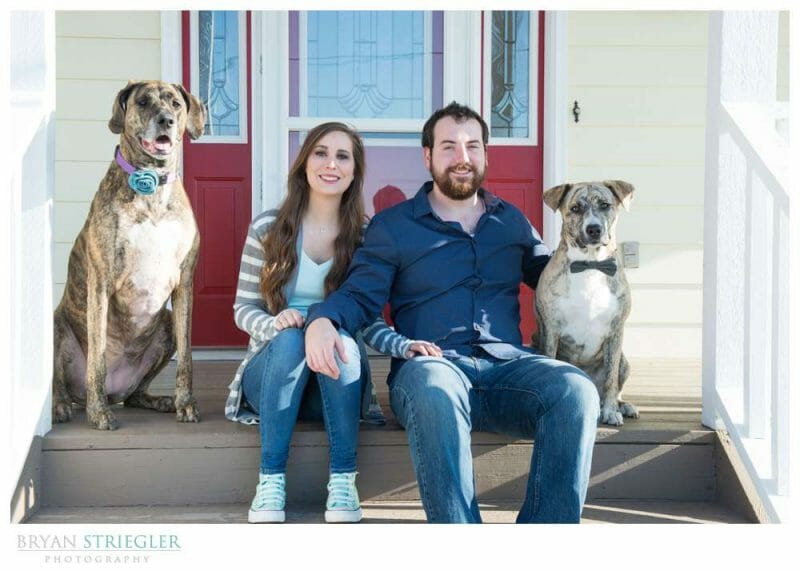 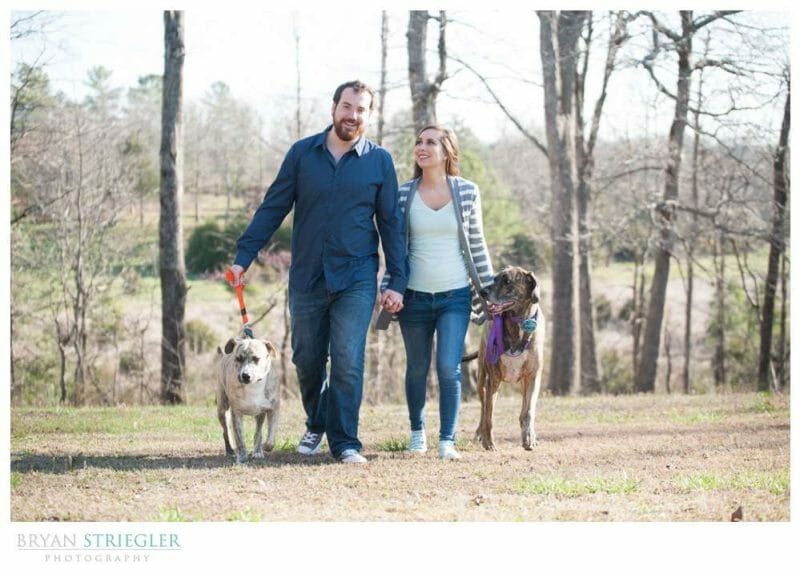 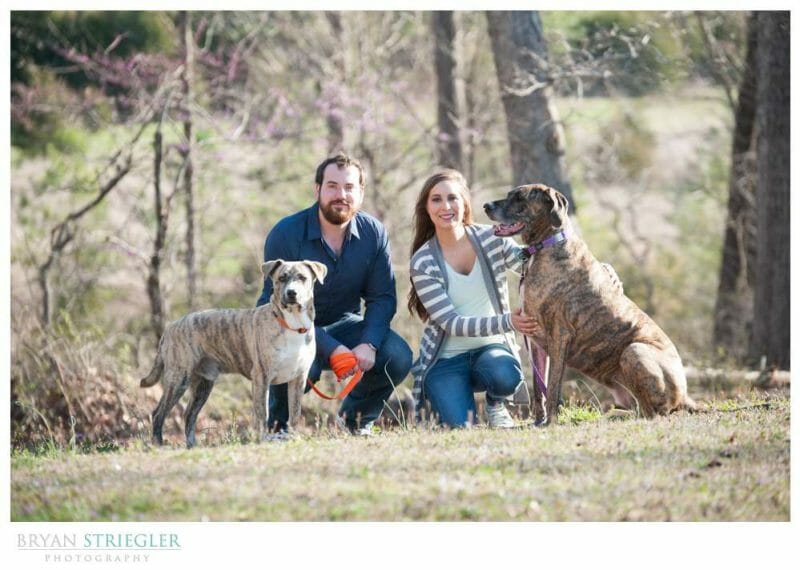 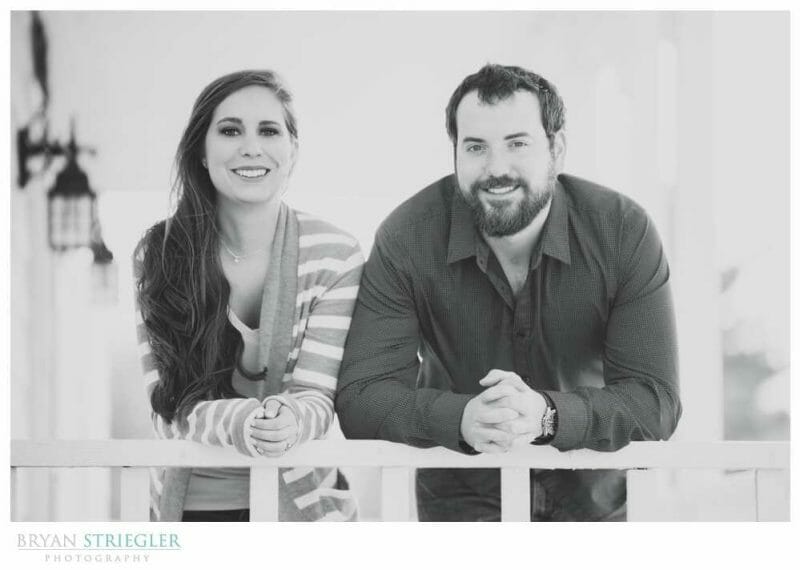 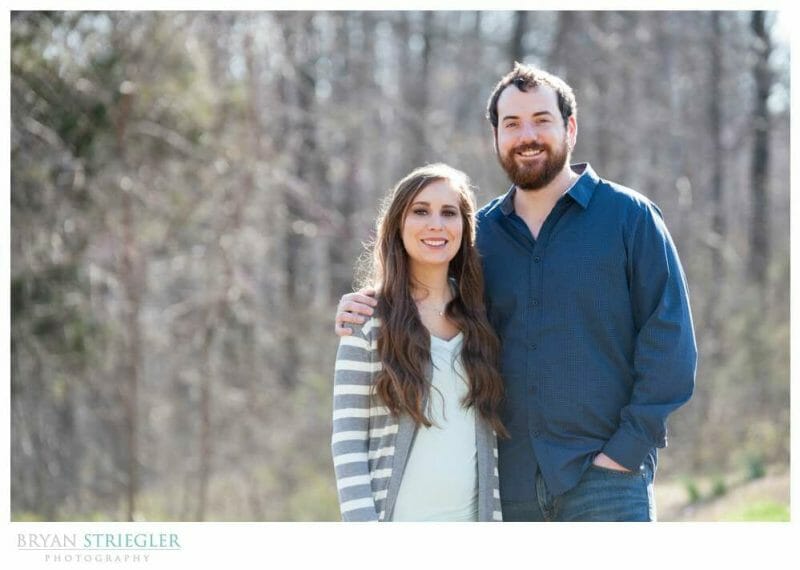 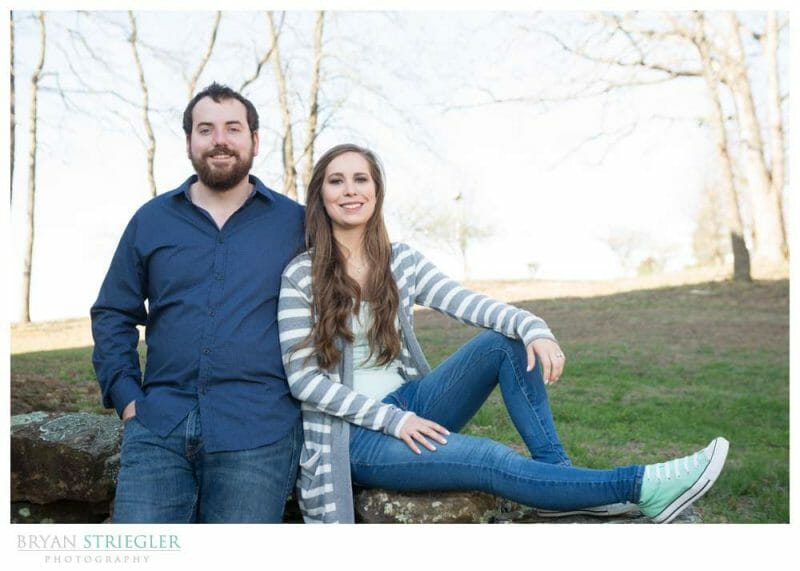 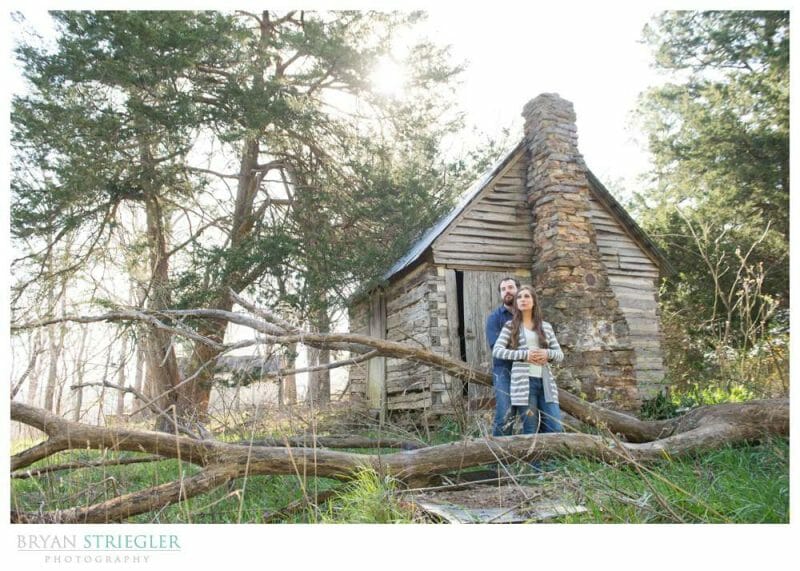 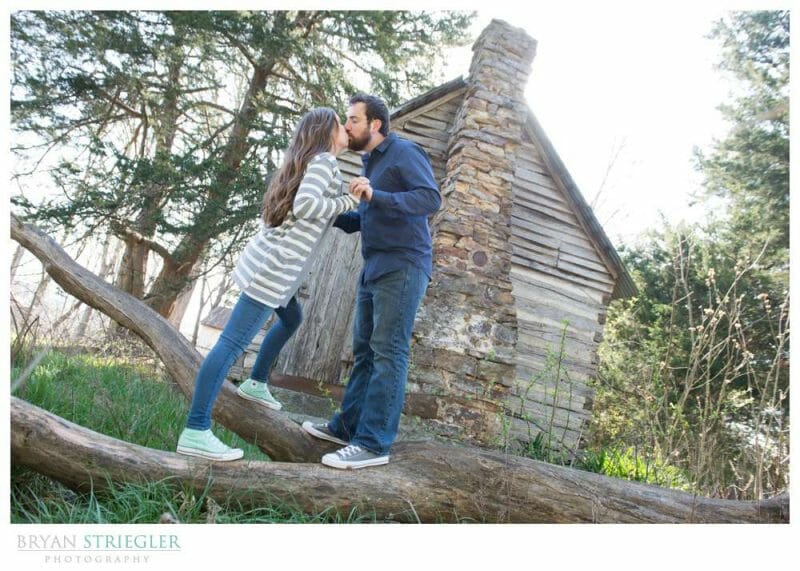 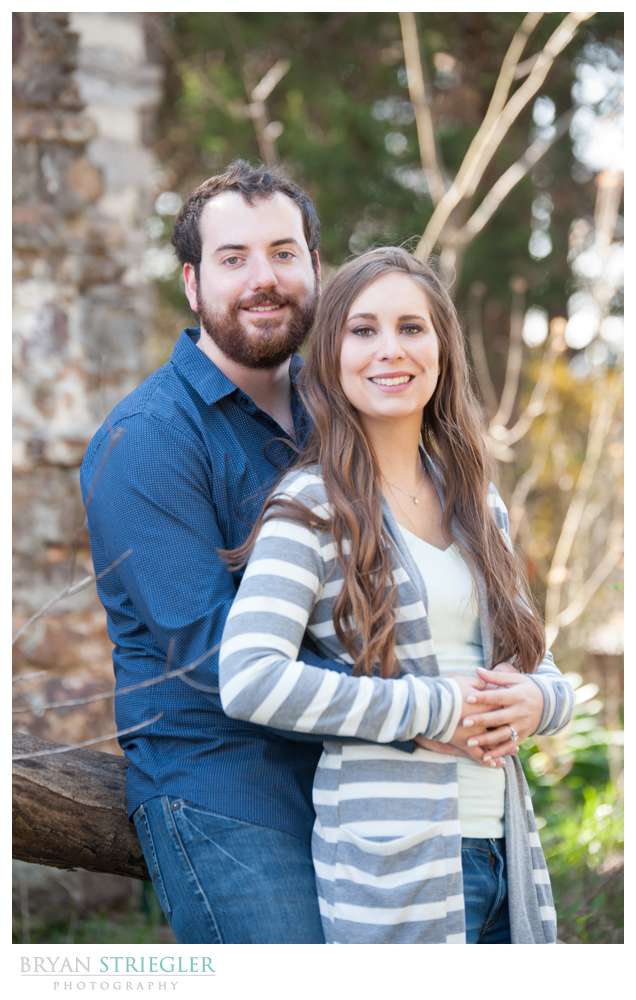 I’m still a little bummed that I don’t get to shoot her wedding, but I’m excited that I got to hang out with her for the engagement shoot. We got some unique engagement photos and I got to be around two cool dogs and two cool people.